Its been a while since I've posted on here....I've been terrible I know!!!

Well, as some of you will know, I moved in April to a new yard in Henley-on-Thames as I was desperately seeking new facilities as I had been training my horses in a flooded arena for over 6 months, and it was becoming somewhat tricky for my Grand Prix hope to actually progress!!

We've had a great time here, helping the owner progress her riding skills when she is not travelling the globe, and also training her horses and selling some for her.

My boyfriend Nicolas Bordas, an event rider joined me here in late summer after spending a year at William Foxpitts.

We are now starting a new challenge in a new yard where we have the room to progress and reach more clients. We are moving just 30mins away to Warfield, to Brookfield Equestrian (which can be googled lol!).

Nicolas will be taking on 3 rides on young eventers and we will both continue training our own and clients horses, also having spaces to take liveries of our own for breaking, rehab, comp training, holiday livery and longterm livery. We'll also be training riders at the yard and around the area...so lots to get our teeth into!!

So from now on news of Nicolas and his eventers will appear on the website until he has built his own site.

Meanwhile, here is a little pic of Nico doing his stuff over the jumps with his own Tchekhov Rouge (now 6yrold) and a pic of my boy at his high profile show, with our first attempt at Advanced!! Thats all for now!! 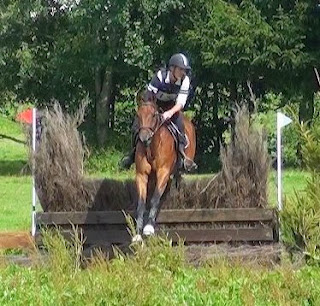 Posted by Demelza Hawes Dressage at 09:26